Updates from :  the Hindu.

B.N. Goswamy’s The Great Mysore Bhagavata tells the story of Krishna through a well-researched text and beautiful paintings from the South

Eighteen thousand slokas divided into 12 chapters or Skandas make up the Bhagavata Purana, which Sage Suka recited to King Parikshit over a period of seven days. It is revered and given a place equal to the Vedas. Of particular interest is Chapter X, which deals with the life of Lord Krishna. When a beautifully illustrated manuscript of the Uttara Ardha of Chapter X of the Bhagavata Purana bearing the royal stamp of the Wodeyar library made its way to an auction, it was for the first time that the world heard of such a creation. The manuscripts were commissioned by Mummadi Krishnaraja Wodeyar III (1794-1868). According to scholar and art dealer Terry Mclnerney, the manuscript became a part of Edwin Binney III and was gifted to the San Diego Museum of Art. The entire manuscript has now been studied and released as The Great Mysore Bhagavata – Complete study of a Manuscript from the Binney Collection in The San Diego Museum of Art by B.N. Goswamy, eminent art critic and historian, with essays by Robert J Del Bonta and Caleb Simmons and published by Niyogi Books. 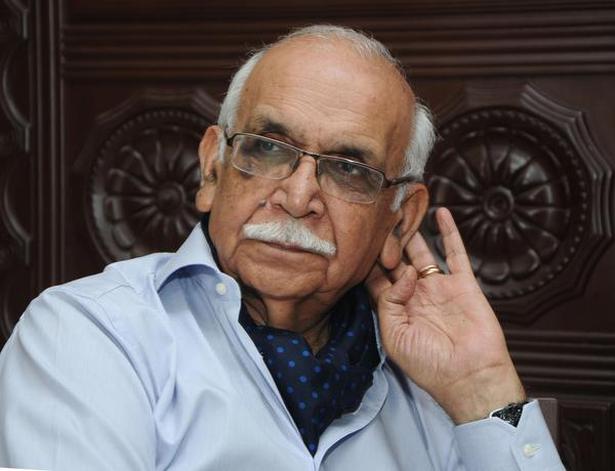 What makes the book special is the care which has been taken to bring out the essence of the manuscript and the rich illustrations of the miniature from South India that is rarely seen. It is to B.N. Goswamy’s credit that though he does not understand Kannada, with the help of a translator, he has worked assiduously to weave a beautiful story that matches the original Sanskrit. In the process, he has brought out the finer nuances, historical references, the renaissance like era of Mummadi and his contribution to the arts and crafts of the region. There is a section devoted to the reign of Mummadi, the numerous books he authored, the series of books he commissioned and the wealth of books in the library. To aid the reader in appreciating the richness of the manuscript, there is an inventory of Illustrated Folios. The notes by Robert Del Bonta try to find answers to several unanswered questions.

What comes through is how rich and extraordinary the library in the State of Mysore was.

Author B.N. Goswamy talks about the writing of the book.

How does it feel to have completed and published the study of The Great Mysore Bhagavata ?

Two things give me great satisfaction. With this publication, I have fulfilled a promise made to a friend of mine, a wonderful person, who passed away not long ago: C.K. Prahlad, the famous ‘Management Guru’, who used to teach at the University of Michigan. It was he who was keen that this manuscript be published. He gave a certain amount of money to the museum and requested me to write the book since he held me in some respect as a scholar. It lay there for over 20 years and, in the past few years through the continued efforts of Jas Grewal and others, finally work started on it. It took me two years to complete it.

Another fact which gives me equal satisfaction is that, in a small way, this work makes a contribution to furthering the study of South Indian painting. Miniature paintings of South Indian schools — Mysore, Tanjore or Thanjavur are barely known in the country. Today, you can pick up a book on Indian painting and not come across any South Indian painting. There is a great imbalance. I am not setting out to correct those imbalances but I certainly want people’s interest and attention to go to the quality of the work done there. Through this book, they might get the rasasvada, the flavour, of the work. 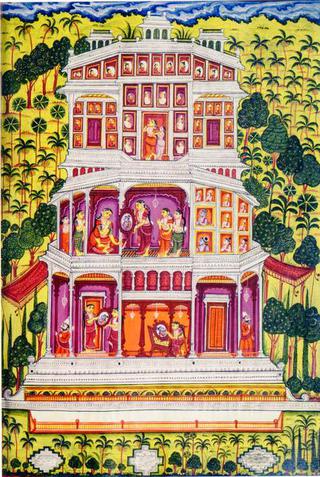 When was the first time that you saw the manuscript and how did you feel when you finally began working on this study and held the manuscript in your hands?

There are some manuscripts, which you have heard of and are already prepared to see: like the Jehangir Album at the Berlin Museum which was published a long time ago. You anticipate a sense of excitementI felt something like an electric charge when I actually held it in my hands. It is a large album and I cannot easily forget the feeling that what I was holding in my hand was an imperial album going back to 400 years or more that had been touched by men of great eminence: not only the royalty but by those who had studied it. The Mysore manuscript did not kindle that kind of feeling, as I was not prepared for it, and there was no anticipation. But I still felt very drawn to it: there was the thrill of excitement, thinking of all those hands who had handled it with reverence since the Bhagavata is no ordinary text.

You say the miniatures from South are not well known when compared to the Pahari or Mughal paintings, so how easy or difficult was it to study this manuscript? Do you think this is just a scratch on the surface in our quest to understand the paintings of the region? Also how rich would the library of Krishna Raja Wodeyar been?

I claim no expertise in Mysore or South Indian paintings. I was taken with the quality of this manuscript. I had never seen anything like this. I have since come across other wonderful manuscripts or folios such as leaves of the Devi Mahatmya with collectors in India and abroad and an exquisite Ramayana series in eight volumes with a private collector. These leaves can conceivably be related to the mural paintings which adorn the palaces. But the royal library of Mysore itself got dispersed, some volumes having been smuggled out. It is a sad story. I do not know the details but a number of manuscripts landed abroad like this one did. When I lecture on it, I bring in two portraits of Krishnaraja, one when he was five and another when he was 60 years old. It is between these years I say that there took place something akin to a renaissance in Mysore. I have no idea about the present state of the library. 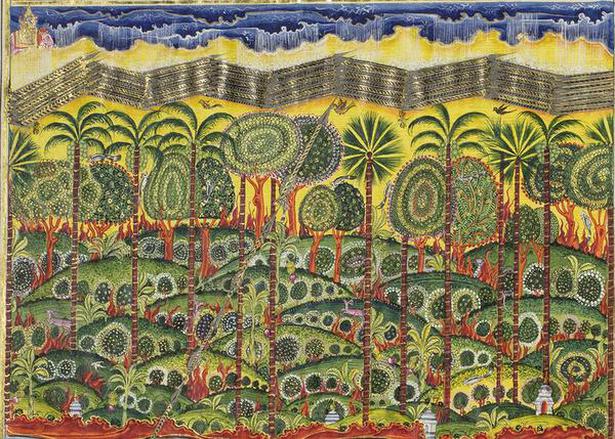 From the book ‘The Great Mysore Bhagavata’

Since the paintings are so intricate do you think the Royal Ateliers were also well-versed in the religious texts?

The principal artist responsible for ‘illustrating’ the text — we do not have the name, even though Tippanna has been speculated upon — must obviously have had helpers, disciples, pupils, who filled out details in the work. But if not all of them, at least the principal artist himself must have sat with pundits, and not only read the texts or had it recited to him, he must have understood the text. For instance, the Khandava-daha painting, a favourite of mine. The episode speaks of the new city of Indraprastha that was to be built for the Pandavas. They had a tract of land covered with forest and the ground had to be levelled to raise a capital city. In this painting, when the forest is set on fire, Agni, God of Fire, is invoked. Indra who does not like it, pours down rain and the fire gets extinguished. The Pandavas are in a quandary and Arjuna is the one who finds a solution. He creates a canopy of arrows shooting them at such speed and in such numbers that they stay in the sky. It is a stunning episode. However, the unusual thing is that in the Bhagavata text, which was being illustrated, it is only cursorily treated; it is in the Mahabharata that there is a far more elaborate rendering of it. Clearly, then, the inference to be drawn is that the painter must have had access to the Mahabharata also. And he must have decided to use his knowledge beyond the confines of this text to illustrate this episode.

This manuscript only has the Uttara Ardha. Do you think the entire Bhagavata or entire Chapter X would have been painted? Or just this part because of the situation the Maharaja faced?

I doubt if the entire Bhagavata was painted, for very rarely do we see the whole of the great Purana painted. In this case, I am convinced that it must have been the entire section dealing principally with the life and exploits of Krishna: the Tenth Skanda.

The Krishna you and I recognise does not appear here and he is portrayed in a form which we do not often see. He is not the charmer seen in Gokula and Vrindavan. There is no mor-mukuta, no pitambara vastra, no venu in his hand. Here, he is a King: Dwarkadesh ruler and administrator, who fights wars and forms alliances. There is thus a different flavour that we sense here. No; I don’t think it was because of the specific situation the Maharaja found himself in when the work was commissioned. The story of Krishna from his birth onwards must have been told in an earlier volume and it is likely that it has been lost. This is an accidence of survival.