Updates from :  the Hindu.

They held a protest in New Delhi over alleged inaction

Delhi Police personnel ended their nearly 11-hour-long protest after assurance by senior officers that their grievances will be addressed.

Addressing the protesters, Special Commissioner of Police (Crime) Satish Golcha urged them to end stir and resume duty, while assuring them that a review petition will be filed against the Delhi High Court order in connection with a clash between cops and lawyers at the Tis Hazari Courts Complex.

Delhi Police should remain firm on it come what may, says Kiran Bedi

Reacting to the incident, she told PTI that she faced a similar situation in January 1988 when a lawyer arrested for theft in St. Stephen’s college was brought to the Tis Hazari court in handcuffs.

“But I remained firm and refused to budge to the demand of the lawyers seeking suspension/arrest of the cops responsible for hand cuffing the advocate,” she said, adding that the person did not identify himself as an advocate at the time of his arrest and also gave a different name to the police.

In the present incident too, the “Delhi Police should take a stand and be firm on it come what may”, she said.

Ms. Bedi, a former IPS officer of 1972 batch who retired in the rank of DGP, said during the 1988 police-lawyers clashes at Tis Hazari, wherein she was DCP (North) then, there were demands from the advocates associations for her suspension and arrest. But the then police commissioner Ved Marwah strongly supported her and rejected the demands, she said.

Lieutenant-Governor Anil Baijal reviewed the situation in the capital in light of the protest outside the old Police Headquarters following the Tis Hazari incident.

“The best possible treatment will be ensured to the injured advocates and police personnel. Suitable ex-gratia compensation will also be given to the injured officers of the Delhi Police”, Mr. Baijal said.

He appealed to all to maintain harmony and law and order, according to the Raj Niwas

“Both, advocates and police, are important pillars of the criminal justice system and should work in complete harmony.  In the wake of the unfortunate incident, it is imperative to restore the trust between the two and to ensure that justice is done impartially in the entire matter,” the Lieutenant-Governor said.

Mr. Baijal also directed the Chief Secretary of Delhi to ensure medical treatment to the injured advocates as per the order of the High Court.

He further directed the Commissioner of Police to ensure that the police officers injured were also provided with medical treatment, free of cost.

Mr. Baijal asked senior officers to assure the police personnel that no injustice will be allowed any member of the force. He also advised the officers to visit the injured policemen.

We are monitoring the situation: Union Home Secretary

“A judicial enquiry is on, we have to wait for its outcome. We are monitoring the situation,” said Union Home Secretary Ajay Kumar Bhalla, when asked about the ongoing protest by Delhi Police.

“How is the Josh? Low Sir!” This echoed in unison amongst thousands of police personnel who have staged an unprecedented protest in front of the Delhi Police Headquarter at ITO here demanding justice.

The policemen, who have come from all across the Capital, are protesting the attacks on their colleagues by lawyers at Saket and Karkardooma District Courts on Monday.

“We want reinstatement of the cops suspended by the High Court following the clash between lawyers and police at Tis Hazari court complex on Saturday,” said one of the protesters.

The underlying current amongst the police personnel is that they have not been given a fair trial by the Delhi High Court, which had on Sunday taken suo motu cognisance of the lawyer-police clash, and ordered a judicial inquiry against the police officers only.

“The High Court has not even allowed us to act on the FIR registered against the lawyers who had attacked the policemen at Tis Hazari, and are now roaming freely,” said another personnel, who also did not wish to be named.

The protesting personnel said they want a review of the High Court order as “it was highly one-sided” and did not take into view the police personnel involved in the Tis Hazari clash.

Two FIRs have been registered in connection with Saket Court incidents. One is based on the officer’s complaint and the other based on a cab driver’s complaint who was also beaten, says the Delhi Police spokesperson.

AAP MLA Saurabh Bharadwaj tweeted that the ruling BJP has “emboldened Delhi Police so much that we are living in a Police State. The Police is least concerned about basic law & order issues in Delhi. Police officers are so arrogant. Delhi Police has been converted into Political Entity and works like a Armed Wing of BJP.

“Remember how whole BJP propaganda machinery was blaming the poor Sikh Auto driver who was mercilessly beaten by Delhi Police I wish Advocates Bar Association had taken stand for the rights of common man then. It’s never late to do the right thing.

“The ugly situation existing in the capital shows complete incompetence of HM. The situation could have been handled maturely by Centre. Lawyers are responsible for getting justice to the people. Police provides security to people. Clashes between them is very unfortunate.”

Bar Council of India has written to bar bodies asking them to identify lawyers “indulging in hooliganism” and requested advocates to end their protest, which is “bringing bad name to the institution“.

BCI Chairman Manan Kumar Mishra in his letter said sparing such “rowdy elements” is tarnishing image of the institution and it is the inaction and tolerance of bar bodies that encourage these advocates, which would ultimately result in “contempt proceedings by the high courts or Supreme Court“. – PTI 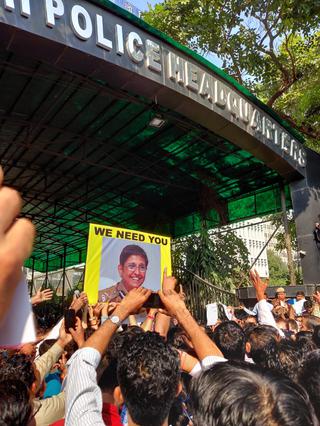 Protesters hold a placard ‘We need you Kiran Bedi’ and raise slogans in New Delhi on November 5, 2019.   | Photo Credit: The Hindu

Delhi Commissioner of Police has asked the demands to be sent inside and they’ll send the response, announced a protesting police officer.

The demands the police sent were:

– Take back security from judges

– Register FIR based on complaints of all injured police officers

– Take back security from courts

– No leniency by traffic cops toward lawyers

“We’ll not move. We’ll not go on duty. We’ll not resume work. Call all officers from still at police stations,” say the protesters.

Delhi Police officers, including the constabulary, on Tuesday held a protest outside the old Police Headquarters near Income Tax Office following the Tis Hazari incident.

Saturday, a clash broke out between Delhi Police officers and lawyers inside Tis Hazari court, allegedly over parking. The incident snowballed into violence and vandalism. Several policemen were injured, while eight lawyers were hurt. One of the lawyers sustained a bullet injury.

On Monday, a video surfaced, in which a few lawyers can be seen thrashing a policeman at Saket Court.

Delhi Police Commissioner Amulya Patnaik on Tuesday urged protesting police personnel to return to work and said they should behave like a “disciplined force“.

Mr. Patnaik was addressing the protesters outside the police headquarters in ITO.

They have been agitating against the attack on a policeman outside the Saket court on Monday.

“We have to behave like a disciplined force. The government and the people expect us to uphold the law, it is our big responsibility. I urge you to resume duty,” Mr. Patnaik told the police personnel, adding that their concerns will be addressed. – PTI