Updates from :  the Hindu :

At 7 am, the 60-year-old Sulthan Hotel in the heart of Madurai is shrouded in the smoke of mutton chukka cooking on a firewood stove. Seated at the first table inside the hole-in-the-wall eatery is a tubby man clad in a chequered lungi and striped shirt, digging into a mound of shreddedparotta soaked in glistening chicken salna. ‘Chomp chomp…’ he goes non-stop, setting right his bushy moustache frequently and opening his mouth wide to stuff in more meat with every bite. He pops in a whole lamb shank and chews on it with such unabashed vigour that one could hear sounds of the bone cracking. He smiles sheepishly and goes back to the business of some serious bone-biting.

Everyone else, occupying the remaining tables in the eatery, also seems so engrossed in eating, occasionally lifting their heads from the plate to look at the crowd waiting outside to get a seat. That’s just a sample of the city’s meat-eating culture, and brazenly gluttonous people.

Mornings in Madurai come alive with the ringing of temple bells, the whiff of jasmine and the aroma of spicy mutton and chicken. There are humble eateries in and around the town that serve heavy non-vegetarian fare for breakfast, which is a rare thing elsewhere in Tamil Nadu. And it has a long tradition to it. Take for instance the 70-year-old Amsavalli Bhavan, a stone’s throw from Meenakshi Temple. The restaurant serves delicacies such as goat kidneys and liver with uthappam or dosas starting from 8 am. To ask for vegetarian options like poori, vadai, sambar or chutney is an offence here! 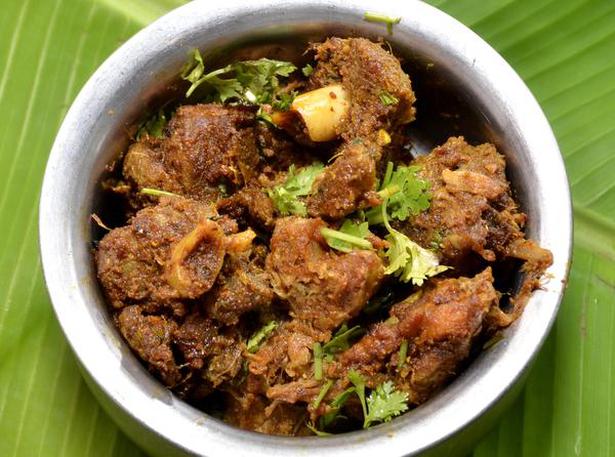 “Earlier, we used to serve many varieties like nenjukari (rack of lamb), gadichops (goat ribs), ratha poriyal (blood fry), suvarotti (goat spleen), brain fry, intestines and kidneys as part of the morning menu that was from 7 am to 11 am. For lunch, it was biryani and meals. There were times when we would cook 15 goats a day. Such was the demand,” says S Chellappa, supervisor. “Now, both the variety and quantity have come down, as youngsters find it hard to digest a meat-heavy meal. The men of yore were such robust meat eaters,” he chuckles.

However, there are two star items on Amsavalli’s menu that have remained popular over the years — kidney kozhambu and vengayakari. The former is the most sought-after dish, so much that people walk in early in the morning and kind of pre-book or request a plate of kidneys to be kept aside while some rush just in time before it gets over.

V Karthik is one such die-hard fan of the kidney gravy. “I eat it almost thrice a week for breakfast, on my way to work. The soft bulbous texture and the oh-so-sumptuous taste of the curry is what I like about it. Eaten with uthappam, it’s a filling breakfast,” he says. Chellappa adds, “On an average, we cook only about five to seven pairs of kidneys and that makes it more special. The vengayakari is a greasy power-packed dish, made from mutton fat and lots of finely-chopped shallots.”

Madurai-based food connoisseur V Arul Murugan points out a possible history to the peculiar eating culture. “These eateries were initially started to cater to the traders and labourers who visited the city’s night-time markets. After doing brisk business till dawn, before returning to the neighbouring villages and towns, the men would typically engage in a meaty breakfast that kept them full for a long part of the day,” he says. “That’s why the price is kept affordable and a chunk of their customers is still the small-time traders. Dishes like attukal paya(goat leg soup), kozhi sillarai kozhambu (curry made with inferior parts of chicken like feet and wings), kushka (rice and spices cooked in mutton stock — it resembles a plain biryani in appearance but has a subtler flavour of mutton) and elumbu roast (mutton bones roasted on tawa) are morning specials at many joints and to devour them is a hearty way to start your day.”